We all know something is going on, but what?

An Interview with KNOWLEDGE 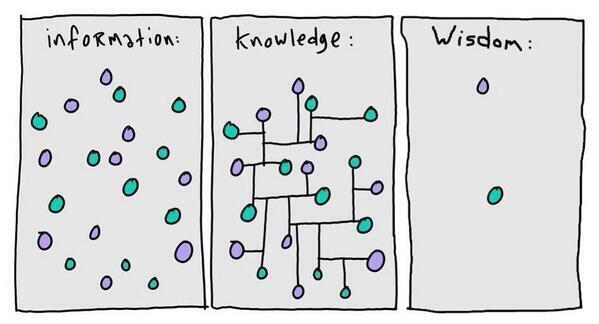 I know.
I know what I know,
but there’s nothing that I know
which I knew before.

Then comes something new,
I don’t know
I know, I don’t know.
Maybe I’m just fooling myself.

There’s one thing that doesn’t know,
another one that knows.
I don’t know, I know,
I know, I don’t know.

Our Host: A beautiful description was given by Language about this time’s guest. How are you doing today Knowledge?
Knowledge: I don’t know.
F.A.L. (Fake Audience Applause)

Our Host: Tell, us something that we don’t know about you.
Knowledge: That’s a pretty difficult task, to tell you what you don’t know.
F.A.L.
Well, I just sort of happened far before Language kicked in. As soon as you can remember something, you have some knowledge. But there was just a limit to how much information you could store in your DNA. Then the boost language gave to the accuracy with which brains could remember was literally mind-blowing. You could reproduce a thought very easily after Language. Knowledge was just the consequence of mind, a device good at doing computation, learning about how to communicate that computation. Thus because of that consequence, a thinkable-life would be unimaginable to a non-thinking-one.

Our Host: So, why so much misinformation all around the world?
Knowledge: After you could store information in the brain, some more techniques were invented like books, even enhancing the process. The Internet literally made available everything to everyone. It’s not my fault you can’t remember stuff clearly. Just keep track of things.

Our Host: How can you prove that I actually know something? and that I am not just fooling myself.
F.A.L.

Imitating as Information: This is my alter ego when I am outside mind. Think of an over-simplified version of yourself as just a basic Input/Output Information processing Machine. You receive an input through one/more senses, do some processing a.k.a thinking on it, and hence come to some conclusion, which in turn could come out as your actions. In short, I don’t know how that happens. No one knows how that happens. So, in a way you are fooling yourself, but then everybody else too are involved in the same fooling process. Every time mind does thinking this, it is converting Information to Knowledge.

Our Host: You’re saying a very intelligent neuroscientist doesn’t know how we think?

Knowledge: It’d be a cognitive scientist, but no he can’t tell you anything more than incomplete theories.

Our Host: Why and How did you begin?

Our Host: Okay, that sounds good and all, but what was the first thing that we actually thought was worth sharing with others?
Knowledge: Not sure if it was the absolute first, but the earliest written records we have are of what-you’ll-call-Philosophy. A Greek dictionary of that time defined the word philosophy as “love of wisdom.” So in a way, the first thing that got people really excited at that time; that they found worth sharing was the answer that they got while pondering “What is our purpose over here?”
Then slowly, the knowledge bag grew. Libraries got bigger. We divided different sections into different fields of study. A recursive cycle of new-emerging-branches of study begin. Then different fields of study became different school subjects. Interestingly, at the same time philosophy, which started as the love of wisdom, became a way to think about questions, then it became a joke, then it became boring, now it’s boring as well as a joke. Forget about anyone understanding or taking it seriously, no one can even hear a long boring joke.

Our Host: Speaking of long boring jokes, I read about this Pythagoras Theorem that I know. I also found out that this is the most well-known longest-boring joke. Now, It is something that we’ve just made out of your mind. Right? Can we say it is some inherent property of Universe?
Knowledge: It is true in the sense that no matter when and where you draw a right triangle, the longest side is the shortest path. It’s just a way to club all the right-angled triangles that could exist anywhere. In a sense, it is universally true. And just because of humans’ egocentric view, you’ll call something an inherent property of Universe, if it was universally true.

Our Host: We have some fan questions if you don’t mind.
Knowledge: Fire away.

Another Fan: A big part of who we are, is what we know. In other words, our sense of identity/personality is often based on how we see the world. And if we learn something new, that doesn’t go along with our worldly view, won’t we have to re-examine who we think we are?

Knowledge: Yeah, it can mess you up.
F.A.L
But when you’ve made peace with that new information, after the complete re-examination of yourself, after you’ve cleared all of your mess, you’ll create a new mess because of people.
F.A.L
Let’s go back to the first idea humans thought was interesting to share, “What is our purpose over here?”. Imagine you have a perfect answer to that. How would you modify your answer with this information:

Now, what did human history tell us, about how we dealt, every-time we had new information.

It’s one of those thoughts which you once have, you cannot not think about it. Just imagine what everyone will be doing when they find out robots can now do your job better than you. A large part of individual’s personality is based on ‘what (s)he thinks their job is?’. Try helping a kid choose his/her career at that time. It’s ironic that humans will eventually be forced to become ‘free-thinkers’ and ‘artists’ rather than realizing that on their own far before this. This mass-ego shift will happen sometime in the near future and I just can’t wait for that day to come. It’s going to be too much fun.
F.A.L.

Our Host: So if I had a new piece of information/idea that I’d like to spread, how would I go about it in today’s society?
Knowledge: Here’s the thing about mind, it’ll keep doing some work based on what it knows and won’t question something that it has been doing in the past. And it requires the least amount of effort to keep doing what it has always been doing. Now, 6.9 billion minds are all together in a synchronous state of a comfortable zone about something and you want to take them out of their comfortable zone and ask them to use their mind to come to a new conclusion and also be comfortable about it. That’s a lot of motivation you’re talking about.
Because if you try to see their point of view, it’s like:

Of course, this point of view of society has matured since then, but still, it’s like:

Our Host: Okay, third last question, what constitutes new knowledge? or who comes up with new knowledge?
Knowledge: Let me tell you a story that everyone must’ve read: Take any field, that you are interested in or want to do something in. While studying about that, you’ll find that there has been some person(s) who has done so and so much to enhance that field, and everyone else is a wanna-be of the original inventor or the wannabe’s wannabes’.

Our Host: Okay, second last question, what would constitute as new knowledge? or how can someone come up with new knowledge?
Knowledge: There’s another brother story everyone must’ve read: Take any field, that you are interested in or want to do something in. While studying about that, you’ll find that there this some problem, if solved, could revolutionize a very big part of that field, and everyone in that field is working to find that new knowledge. It a tricky task trying to playing hide and seek with something that you don’t even know how it looks like.

Our Host: Okay last question, with all the knowledge I have, how can I explain when someone is doing some inexplicable stuff?
F.A.L.
Knowledge: Well, here’s the thing about the mind, it has been doing some completely different stuff for a lot of years, mostly following survival instinct a.k.a. gut-feeling. Now, suddenly if you want to use it for 1000% different stuff, you’re most definitely going to get at least some weird anomalies called “unexplainable stuff.”

Our Host: Thank you for being here.

Knowledge: Always at your service whenever you need me.

One thought on “An Interview with KNOWLEDGE”

Public polls say best posts among these are: